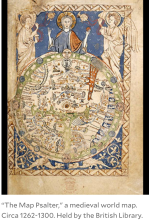 The following story by Kendall Teare appeared on the Yale News website, 29 August 2019.

This year at Yale, two new literature classes will push the boundaries — cultural, linguistic, and geographic — of what we talk about when we talk about medieval literature. The aims of the classes are complementary but distinct: One will push against the strict definition of “English literature” in the Middle Ages, while the other will challenge the notion of borders between both the societies and the literary genres of the medieval world.

The first, “Multicultural Middle Ages,” a fall-term lecture course taught by Ardis Butterfield, the Marie Borroff Professor of English and professor of French and of music, is described in the Yale course catalog as an “introduction to medieval English literature and culture in its European and Mediterranean context, before it became monolingual, canonical, or author-bound.” The second, “Medieval World Literature, Genres and Geographies,” a spring-term seminar taught by Samuel Hodgkin, assistant professor of comparative literature specializing in Persian and Turkic literatures, is a “comparative survey of classic texts from around the medieval world.”

For the rest of the story, see https://news.yale.edu/2019/08/29/medieval-literature-without-borders-new-classes-rethink-middle-ages .