Congratulations to Lian ZHANG on the publication of her essay, “Chaucer in China: A History of Reception and Translation” in Chaucer Review 55.1 (2020), available online through Project Muse. 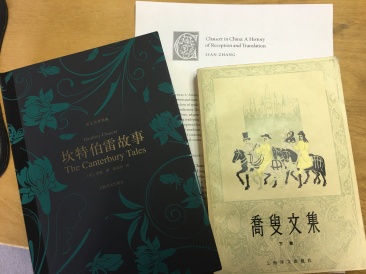 Arranged chronologically, this article presents a general picture of Chaucer reception and translation in China, and examines the development of criticism and the interaction of readers with both the original texts and their Chinese translations. By using indicators like university curricula, editions of translations and reprints, criti- cal analyses, adaptations, and popularizations, this study shows that there have been increasing readership in medieval literature and rising admiration for the poet through- out the reception history, with occasional sharp changes. This reception pattern is deter- mined by a combination of factors such as the intrinsic qualities of the texts, readers’ concern over contemporary social issues and their own literary past, and the political and intellectual context of the nation as a whole, as well as of interaction with the outside world.

Brent 2020 has set 10 September 2020 for the premiere of Zadie Smith’s Wife of Willesden. Directed by Indhu Rubasingham and designed by Robert Jones, the play is scheduled to run 10 September – 31 October 2020 at London’s Kiln Theatre.

‘Married five times. Mother. Lover. Aunt. Friend.
She plays many roles round here. And never
Scared to tell the whole of her truth, whether
Or not anyone wants to hear it. Wife
Of Willesden: pissed enough to tell her life
Story to whoever has ears and eyes…’

For ticket information, go to https://www.brent2020.co.uk/events/wife-of-willesden/ .

In late fall 2019, Creation Theatre (Oxford, UK) presented its adaptation of The Pardoner’s Tale to local audiences. Because the company sees the entire city as a

potential stage, this production was performed in multiple venues, including the Covered Market, Blackwell’s Bookshop, and the James Street Tavern’s beer garden where “spectators, huddled together under blankets and patio heaters.”  In addition to a comic rendition of the Tale itself (as the company’s blog explained), audience members were also given the once-in-a-lifetime opportunity to purchase “sacred relics.”

Did you see this production? If so, drop us a note and tell us what you thought.

The production was announced as a prelude to developing the entire Canterbury Tales. For more about the company and its mission to tell “classic stories in new ways,” see their website.

Fifty years after it’s 1969 appearance in the Rose Bowl Parade with a giant replica of the Ellesmere Chaucer, the Huntington Library marked its centennial with another flower-studded entry in Pasadena’s 2020 Tournament of Roses Parade. Again, the Ellesmere Chaucer was prominently featured.

Though I have yet to find a photo of the finished float at the parade, here are three links to articles with images of the float in development: Sierra Madre Weekly, Pasadena Now, and a Princeton University newsletter. 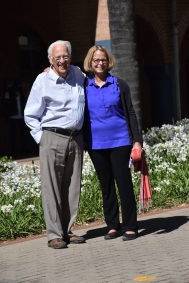 Without the enthusiastic help and support of Chaucer’s many living translators, the Global Chaucers project would have had a much narrower scope. From the beginning, the practical insights and experiences of these translators have tempered and shaped our theoretical perspectives.

One of the first translators to share his thoughts about translating the The Canterbury Tales was John Boje of Pretoria, South Africa. Boje began translating the Tales when he was still a schoolboy. In 1989, he published a volume of selected tales–‘n Keur Uit Die Pelgrimsverhale van Geoffrey Chaucer–which made it past the government’s censors and received a surprising number of accolades. Over the next 25 years, he continued to translate until he had completed all the tales.  His translation project–worked on during a sixty-year period spanning the time during and after the apartheid regime–provided an unusual device for commenting on the upheaval and injustices around him.

During 2013 and 2014, we had a lively exchange, wherein my “simple” questions (such as “How did you handle metaphors?”) prompted lengthy, lively and thoroughly thoughtful responses from him. Seeing one of his notes in my inbox was always a treat. We learned a great deal from him about translation as well as the peculiar situation of translating from Middle English to Afrikaans, a modern language not too distantly related to Chaucer’s language yet fraught in its relationship to the other languages of South Africa.

Aspects of Boje’s translation and his astute perceptions have made their way into several Global Chaucers essays, articles, and book chapters that Jonathan Hsy and I have written.  But until now, few of Boje’s own reflections have made their way into print. This week, I learned that his University of Pretoria doctoral thesis, “‘Save our tonges difference’: Reflections on translating Chaucer’s Canterbury Tales into Afrikaans,” has been accepted by the examining faculty. Finally, Boje’s engaging account of his translation is ready to share.

I read a near-complete draft last June and was impressed by his exploration and assessment (using an auto-ethnographic approach) of the translator’s role and the challenges faced when the “stock value” of the source text seems to be declining. And though he had not made much recourse to translation theory while translating, his thesis demonstrates his trenchant understanding of the various theoretical paradigms and how they allow him to view his project from those perspectives. I was delighted to see that his examiners concurred. Congratulations, John!

The Guardian reported on 12 November 2019 that Zadie Smith (author of White Teeth among other notable novels set in contemporary London) is adapting The Wife of Bath’s Tale (but I suspect they mean her Prologue) for the borough of Brent’s 2020 program marking it as a “borough of culture.” Titled The Wife of Willesden, this first play by Smith will be a monologue performed at Kiln Theatre. The article reported that, per Smith, the piece will “raise questions about the place of women in society and aim to capture the voice of Brent.”

By adapting the Wife as a vehicle for a distinctively localized and contemporary voice, Smith is not alone. Jean “Binta” Breeze’s “The Wife of Bath in Brixton Market” and Patience Agbabi’s “The Wife of Bafa” have adapted the Wife’s monologue for voices associated with the African Diaspora.  (See Jonathan Hsy’s posting where he describes  how he incorporates their work into his classroom teaching.) In Brazil, Francisco Botelho has adapted his Brazilian-Portuguese translation of The Wife of Bath’s Prologue into a one-woman dramatic monologue.

We’ll keep an eye on updated information on Smith’s Chaucerian play. And for those wanting to see a performance, we will post dates and ticket information as soon as they appear.